A particular comment on a television show we were watching recently has stuck in my mind. It was made by a British woman who had reached the magnificent age of 101. She was in remarkable good nick and during the interview had said ‘People always ask me, what is the secret to your longevity? And I always say, a little bit of what you fancy does you good but don’t make a pig of yourself.’

In this age of don’t eat this, eat more of that, eat less of that, eat only that; her view resonated with my food philosophy. Which would probably be ‘a little bit of this and a little bit of that, just don’t go nuts’. I will clarify this by saying that I do sometimes go overboard, being the happily imperfect human being I am.

Fanaticism and radicalism have never sat well with me. Sometimes it feels that my attempt at viewing food in a well balanced manner is under attack, albeit, by a well meaning barrage of good intentions. (It’s ok, no paranoia here, it is completely understood that it’s not directed purely at me.)

The issue is, as a devourer of new food information and being an open minded wee Cheergerm, it floats my boat to learn new things and experiment with different ingredients and recipes. It’s all about keeping it in perspective. Continuing to still enjoy what is loved as well as opening my mind up to new ideas. So the mantra of ‘a little bit of what you fancy’ is compelling in whatever direction that may take me.

Teresa Cutter, aka ‘The Healthy Chef’ has some great recipes. What I love about her is the many alternatives she provides in her recipes and so far, they have all worked. Three out of four CheergermYakatarians adore her nutritious (read low fat, low refined sugar) version of banana bread. I made a little adjustment and replaced some of the almond meal with sorghum flour to attain a lighter texture. Try using a stick blender to zshoosh the mixture as it really keeps the texture nice and light. The ground flaxseed acts as a fantastic natural binder in lieu of gluten.

This loaf is subtly bananaish, light and moist without too much squelchy almond meal texture. A hint of vanilla and cinnamon. Not sweet, at all…I mean, really not sweet but quite delicious with a smear of the good stuff, yeah, we are talking about butter. Give it a try, you might just fancy it.

HOW YOU DO IT
Preheat oven to 160C.
Oil a loaf tin and line the bottom with baking paper. The size I used was 13cm x 22cm. The original recipe used 10 1/2 cm wide by 26cm long.
Combine smashed banana, eggs, honey, vanilla, oil, cinnamon, bicarb soda and lemon juice (the lemon juice activates the bicarb) into a large bowl and mix by hand or better still, use a stick blender or big blender of some kind.
Add the almond meal, sorghum flour and flaxseed and mix thoroughly.
Spoon batter into the tin and bake for 45 minutes to 1 hour or until a skewer inserted into the centre comes out clean.
Cover the top with foil if it starts to overbrown. I covered my loaf at 40 minutes and it was ready at 55 minutes.
Remove from the oven and allow to cool before turning out.
Slice and serve with a creamy smear of butter. 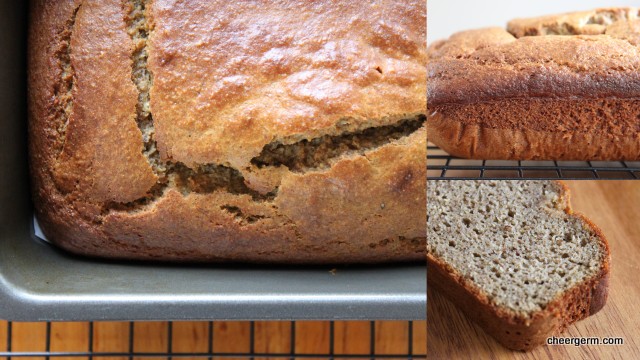