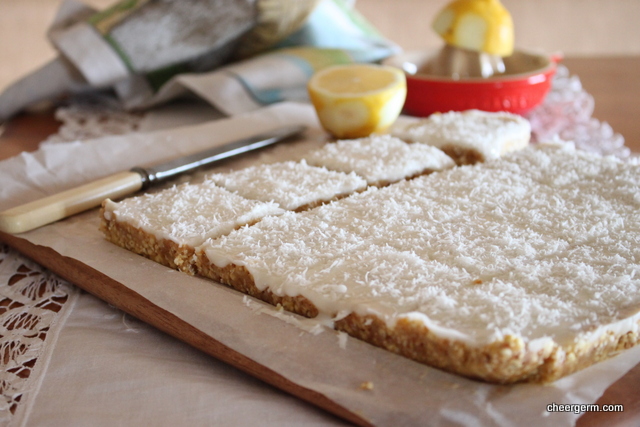 This recipe was a happy accident. Others accidents I have experienced have been far less joyful. Take for example the time that I gained rather painful third-degree burns on a delicate part of the anatomy, upon backing into a wall heater. In my defence, it was a cold and wintery Melbourne morning and the heater was irresistibly warm. No cheer found there.

Then a few years ago, I boarded a train, holding Kid 2’s pram with one hand and attempted to open the train door with the other. Pushing the door with undue force, I overbalanced and slipped into the gap between the train and the platform. Dangling from the train door handle, I utilised my superhuman strength and propelled myself upwards. My shoulder was badly damaged but I did have the wherewithal to let go of the pram when I slipped. Could have been worse but again, not happy.

Or the time that I haphazardly found myself in the middle of a bar fight that had nothing to do with me and was punched in the face. That experience provided very little glee indeed.

This tasty no-bake slice is just as good using either gluten free or regular store purchased biscuits. The recipe required 250g of biscuits but my pantry only coughed up a mere 160g packet of gluten free Anzacs. What to do? With the temperatures set to unseasonally and prematurely soar to 37 degrees Celsius there was no way that I was getting in the car to go shopping. It was also a public holiday and lassitude ruled the day.

Necessity once again being the mother of invention, my beady eyes happened upon some bags of puffed amaranth and millet. A cup of each was added and Eureka! It worked.

Chewy, cold, buttery and sweet, this fridge slice is balanced by a superb lemony punch. A happy accident indeed and so much more enjoyable than a real punch in the face. Trust me.

HOW YOU DO IT
Line a lamington tin with nonstick baking paper.
Place condensed milk and butter in a saucepan. Stir over gentle heat until the butter has melted and the mixture has combined.
Crush the biscuits very finely. (Either old school by placing them in a plastic bag and beating the stuffing out of them with a rolling pin or sensibly, as I did, by placing them in a food processor.)
Place the biscuits into a large bowl, add the lemon rind and coconut. Mix well.
Add the condensed milk and butter to the biscuit mixture. Mix well.
Press the mixture into the tin, my slice was about 1.5 cm thick and about 24cm long x 23cm wide, it didn’t use up all the tin. Refrigerate for one hour.
Icing: Combine the sifted icing sugar, lemon juice and butter in a bowl. Mix well until smooth. Spread over the chilled biscuit base and sprinkle with the coconut.
Refrigerate until the icing is set, cut into small squares.

A Cheergerm adaptation from a recipe found on the Allrecipes website. 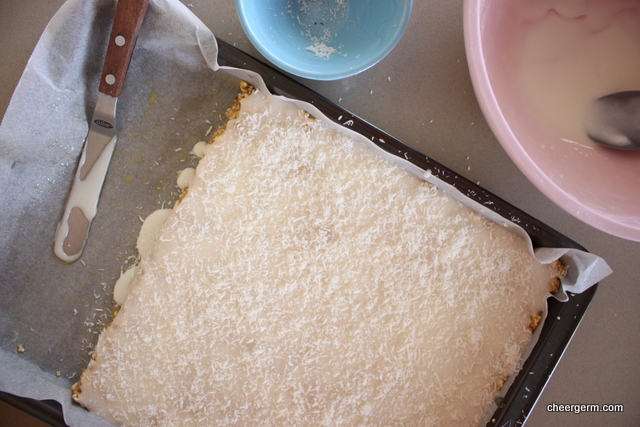 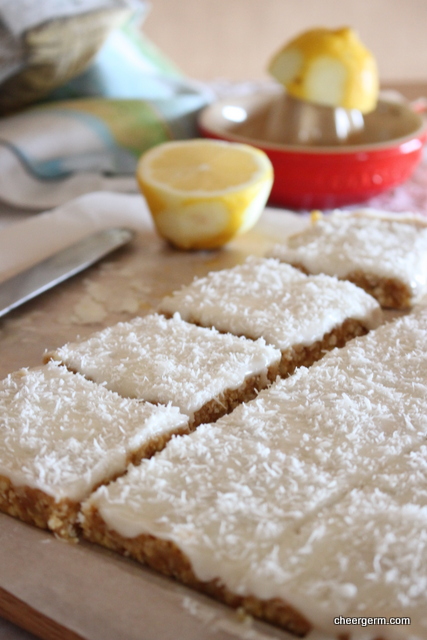 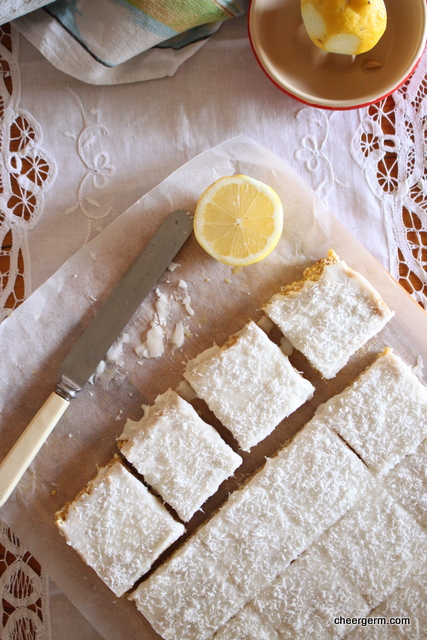