The Yak was orating upon the delight of the humble potato, his favourite vegetable over all others. We could say in fact, that in his view, it is The King of the Vegetables. As he plainly stated, there isn’t much that you cannot do with the tatie. Bake it, boil it, steam it, mash it, grate it, fry it, smash it, dumpling it. Perhaps The Yak has a point? What he was really trying to say was, could we please have potatoes for dinner?

The pantry was laden with potatoes, I also had some delicious looking Comte cheese that I had purchased at the cheese shop. I suffer from an insidious illness that I would not wish upon anyone, it is called ‘Cheeseyearningitis’. It entails standing in front of a cheese counter, looking longingly at cheeses that one wishes to try but one also knows, that one is of an age where one can no longer eat every cheese that ones hankers after. This is due to a waistline thickening on a daily basis and a propensity towards high cholesterol. ‘Cheeseyearningitis’. Look it up, it really exists.

Comte is a semi-hard French cheese made from unpasteurised milk obtained from cows that have only been freshly and naturally fed. It is very similar to Gruyere but a Comte cheese can only be called thus if it adheres to a whole bunch of strict Frenchy regulations. God Bless the French.

I was thinking of a good old potato bake but a googlebumble led me to this delightful concoction, a Comte and potato galette. (Galette meaning a flat pancake and this dish is intrinsically that, a pancake like concoction of cheese and potato.)

The smell of this simple dish baking caused dribble to surreptitiously slide out of the corners of my mouth. Luckily, no one was watching. How best to explain the odour of this cheese baking? I imagine that it is the smell of the meadows in the French alps, of the sweet grass and alpine flowers that blissfully happy European cows chow down upon.

This cheese and potato dish was nutty, sharp, crunchy and almost caramelised around the edges. Unfortunately, all the children present loved it so there were barely any leftovers. Which really sucked. As a French cow would say, ‘Le Moo, Le Sucky.’

2 tbl unsalted butter (30g)
1 kilo potatoes, peeled and coarsely shredded. I used Desiree because it’s all I had, the recipe called for Yukon Gold. I shredded them in my food processor, oh yeah. Squeeze the potatoes well to get rid of as much liquid as you can.
200g Comte cheese, grated
1 1/2 tsps sea salt
1/4 tsp ground nutmeg
Black pepper

Preheat oven to 180C.
Preheat a medium size frypan, add half the butter and melt it.
Place 1/3 of the shredded potatoes into the frypan, sprinkle half a teaspoon of salt, some grinds of black pepper and sprinkle some nutmeg evenly across.
Sprinkle 1/3 of the cheese over the potato.
Place another 1/3 of the potatoes on top, season with salt, pepper and nutmeg and add another 1/3 of the cheese.
Add the last 1/3 of potatoes, drizzle the remaining butter on top then press the mixture down with the back of a spatula. Season with salt, pepper and nutmeg then sprinkle the remaining cheese on top.
Over a medium heat, cook the potatoes for about 10-15 minutes until the potato on the bottom starts to sizzle.
Transfer the frying pan into the oven and cook for about 25-35 minutes until golden brown and the potatoes pierce easily with a knife. (Meaning they are cooked.)
Eat it down quickly before the children do.

Recipe knicked from the website listed below, only a minor change was made to it. 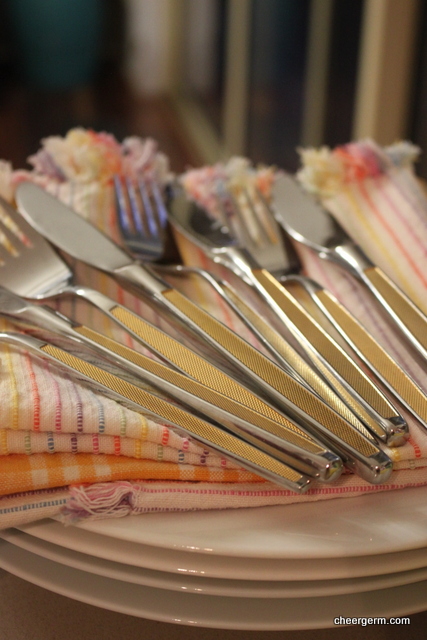 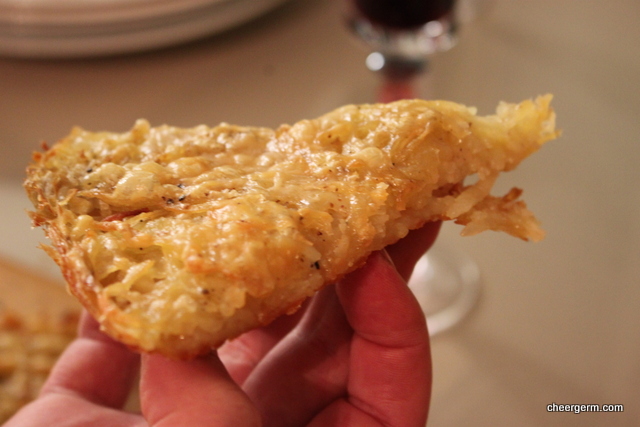